Harrogate (UK), 14 June 2018 – Elaine Ball Technical Marketing, backed by a group of corporate geospatial sponsors, has released the third in a series of GetKidsIntoSurvey posters designed to help businesses and educationalists encourage more children and young people to take up surveying as a career. The campaign takes a strategic, long-term approach to tackling the severe global skills shortage in surveying. 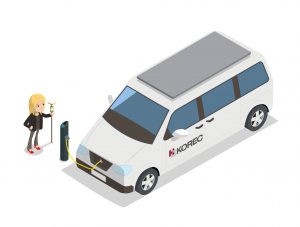 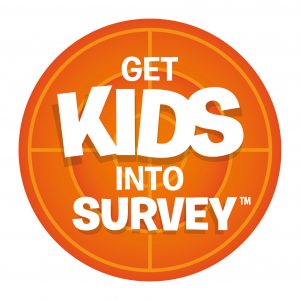 The latest poster, featuring a ‘Smart Cities’ scene, was launched at the TopoDOT User Conference, Orlando, and Geobusiness, London, last month. Like the two preceding GetKidsIntoSurvey posters, ‘Smart Cities’ is a busy, colourful illustrated scene (A1/US Standard 24×36) designed to get children thinking about how we measure our environment. It’s packed with interesting things to find while showcasing some of the amazing jobs surveyors do.

Featured in all the posters are Professor Topo, Geo Ginger, Evan the Eagle and cute little TopoDOG. In ‘Smart Cities’, they show how surveyors use specialist technology and skills to find underground cables, monitor train tracks, measure heights, map streets, and visualise the inside of buildings. This latest edition includes a series of questions to encourage children to explore the scene, discuss it and learn about surveying – such as: “Spot the yellow ground-penetrating radar – what do you think it does?”

Illinois-based Timothy Burch, director of surveying at SPACECO Inc and secretary of the USA’s National Society of Professional Surveyors (NSPS), says of GetKidsIntoSurvey: “I was fortunate to be exposed to surveying early in my life. But for those who are searching for a great career with huge potential, look no further!” 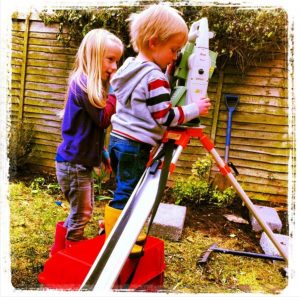 The campaign is aimed at children aged 8-12, but the poster series is equally suitable for teenagers and adults – and can help surveyor parents explain what they do all day! The posters are being marketed to survey firms who will use them to engage with children and young people through schools and local groups. They are also available directly to teachers (particularly geographers) and careers professionals. 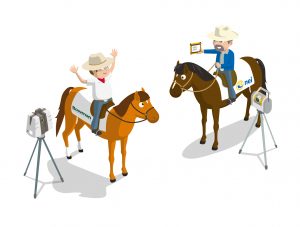 ‘Smart Cities’ can be ordered online at http://getkidsintosurvey.com in single quantities up to 10 or in packs of 20, with larger volumes available on request. The NSPS will be distributing the posters in the USA/Canada, with Elaine Ball Technical Marketing handling shipping to the rest of the world. Educationalists can access the posters for free and need only pay for delivery. For anyone else, the cost is £1 per A1 poster (plus delivery). The money raised through the sale of the posters is being re-invested in a series of future aids to get children and young people interested in surveying as a career.

The next poster, due for release in Q3 2018, will be entitled ‘Mining Australia’ and will be based on Kalgoorlie Super Pit 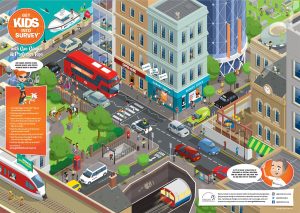 The #GetKidsIntoSurvey campaign was first launched in November 2017 (with a print run of just 500 ‘English countryside’ posters). It immediately took off on social media, revealing a considerable appetite among survey firms to create a wider future candidate pool. Another poster quickly followed, entitled ‘Antarctica’, featuring underwater drones, hand-held scanners and surveys of the ocean floor.