What is a mobile LiDAR system?

Let’s answer the second part first – what is LiDAR? It’s a sensing technology which uses a sudden, short pulse of very bright light, in a thin beam, to measure the distances between things. People called ‘surveyors’ use LiDAR ‘scanners’ to send out these pulses of light, so the scanners are a bit like a cross between a camera and a torch. These pulses then hit objects like trees or buildings, and then bounce back to the scanner almost as if they’d hit a mirror. The scanner records how long that bounce-back takes, which tells it very accurately how far away those objects are. Surveyors collect loads of these individual measurements all at once, and use them to create 3D computer models and maps of objects and environments. You can find out more here.

Now for the other bit – when is LiDAR mobile? This is when the scanner has been mounted onto something which can move. This might be on top of a car, under a boat, on a high-flying drone or aeroplane, or even in something as simple as a backpack. So now those measurements can be collected over large areas and in hard-to-reach places like forests, busy cities with lots of skyscrapers, and the tops of high mountains.

How many mobile LiDAR systems can you see?

There’s a total of 9, including 2 aerial systems.

Can you find any mobile LiDAR systems in the air? How many are there?

Look at the compass and discuss which direction the mobile lidar vehicles are heading in.

Which surveyor is measuring the size of the hole where the UFO is?

She’s in grid 4G, and she’s using a Trimble SX10 scanner. This one’s on legs, so although she could carry it around between jobs, it’s a static scanner because it can’t be moving while she uses it. 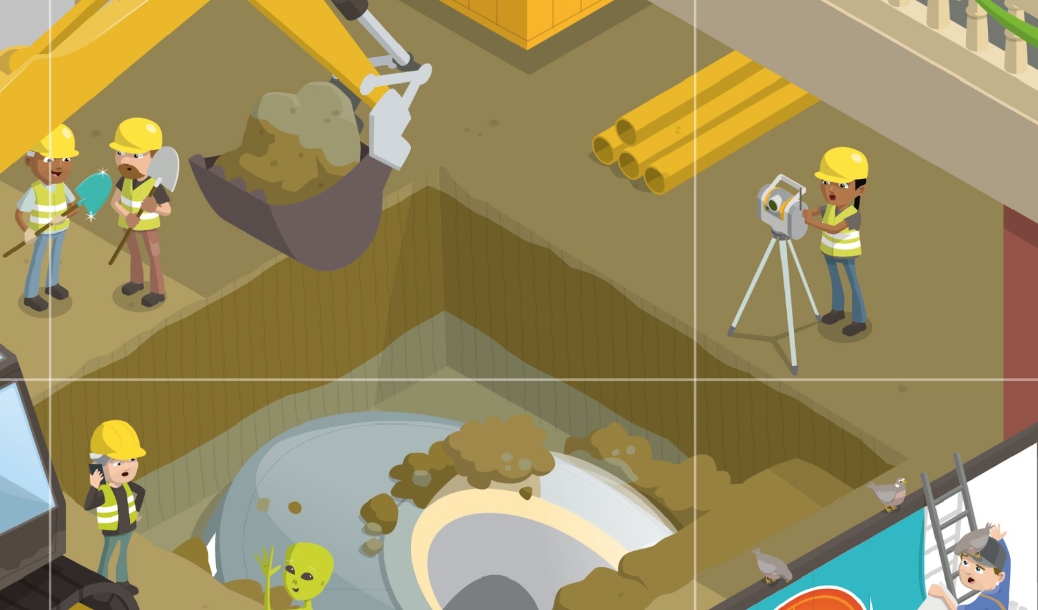 Can you guess what the surveyors are measuring next to the asphalt machine, which is laying new tarmac on the road?

The Murphy Survey surveyors are in grids 4I and 5I. They’re surveying the road to check that the new tarmac is level, so cars and bicycles can drive along it safely and so that it won’t suffer uneven wear (which means it would need to be repaired more often, which is expensive and means the road has to be shut for a while). If the tarmac isn’t evenly spread, there will be bumps that could send cyclists flying as well as dips which will collect water. Plus, if the surveyor spots that the road surface is even a tiny bit higher than it should be, it means the workmen are laying down too much tarmac and so they’re wasting money.

Find Sir Scan Allot. How on earth can he type on several computers at once?

Sir Scan Allot is in grid reference 1C and he’s a squid. Most squids have eight arms, plus two longer feeding tentacles. The squid is a member of the cephalopod group of molluscs, which also includes octopuses. And with all those arms, Sir Scan Allot can get a lot done in a day.

Which scanning system is looking under the street?

CAT Surveys is using a ground-penetrating radar system, or GPR. Light won’t go through the ground, so instead this kind of scanner sends radio waves – but the principle is just the same. The scanner measures how long it takes for the radio pulses to bounce back, and collects that data on a laptop. Then the surveyor can visualise what it looks like under the ground, and ‘see’ hidden things like pipes, cables and tree roots. This can be very useful if you’re building something and don’t want to accidentally cut into a water pipe or electricity cable – otherwise, thousands of homes, businesses and schools might not be able to turn on a tap or a light. Or maybe you’re looking for a broken or leaking water pipe, and have to check a very long stretch of pipeline for where that leak might be – you just couldn’t dig it all up to check, but a GPR system can quickly and cheaply find what you’re looking for.
(Do you think surveyors ever find buried treasure this way?)

Here she is in grid reference 3C, measuring the height of this tree using a laser range-finder. Nifty, eh? 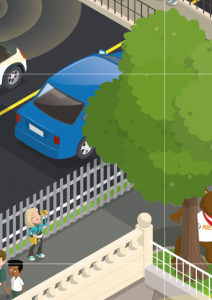 Captain Alice is in grid reference 2E. She’s a real-life cartographer – someone who makes maps! Here, she’s showing her map of the city to two surveyors who have got lost, and helping them get back to their job site. 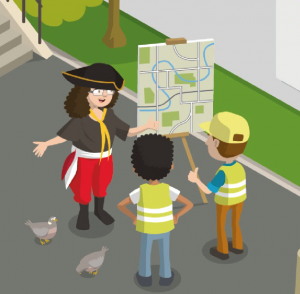 Bonus points: Can you find Prof Topo and Piggle Wiggle?